The Good, The Not So Bad, The Ugly, and the Delicious

The Good, The Not So Bad, The Ugly, and the Delicious
Download PDF

Summer ends…again. Always too short; difficult to let go. Football and cool mornings are welcome, but there’s a heaviness to it. It’s cliché, but winter is coming--commutes in the cold and dark, and a reckoning with the year’s end, and what could have been. But it was a good summer…aren’t they all, mostly. It began with the markets just touching into bear market territory as extreme hand-wringing about a possible recession gave way to somewhat more encouraging data, both on the economy and corporate earnings. Stocks rallied hard through the middle of August as the warm weather, long weekends, and, most obviously, lower gas prices had markets hoping (yes, markets can hope) core inflation might be ebbing. Unfortunately, not yet. The late August inflation readings crushed hope, and left little doubt that the Fed had more to do. Still, equity markets ended the summer a tad above where they began. As we said, it’s not easy to ruin summer.

As referenced above, corporate profits have mostly held up. Stocks have traditionally been considered inflation pass-throughs and that looks reaffirmed. The chart below shows the last ten years of the core of the S&P500’s pre-tax profit margins. They’ve declined a little but are still in the range of the last ten years. This is the critical factor in the resiliency of the markets in the face of an abundance of bad news. Profitability has not only held up but remains robust, and it’s worth noting why. Our markets are no longer headlined by plodding, deeply cyclical businesses. In fact, just the opposite. A sort of cream of global franchises has risen to the top of our large cap universe. Monopolies might be an overstatement, but it’s close. And they’ve had decades to fine tune not only their markets but also their costs and internal controls. They are formidable. That’s not to say a recession wouldn’t dent their earnings; it would, but to what degree is an open question. As for the more pedestrian areas of the market, an average recession will produce a significant decline in earnings.

And while earnings, so far, haven’t been too bad, the inflation picture is ugly. Initially sparked by supply chain issues, surging goods demand and record stimulus, inflation has now morphed into a stickier labor supply and demand problem. Baby Boomer retirements, immigration restrictions and Long Covid have us in an unusually tight labor market. The pie chart on the following page decomposes the change in personal consumption expenditures (PCE) inflation, a favorite measure of the Fed. What level of labor slack is required to bring wage pressure to heel is another ongoing question, yet one the Fed appears determined to answer. It has raised the fed funds target rate 5 times this year from 0.25% to now 3.25%, an unprecedented move. Credit markets are now expecting it to top out somewhere above 4%. This will undoubtedly slow the economy, cooling labor demand. But interest rate changes take time to work—several quarters. Of course, the Fed knows this, so our guess is we are close to the end of the tightening cycle. But, there’s no sugar coating it, recession odds for next year are higher than they were before the August inflation readings were posted. This is no secret. There’ll be no surprise recession this time, which makes placing bets very tricky. The real question is; if yes, then how bad? Evidence at this time still points to mild. 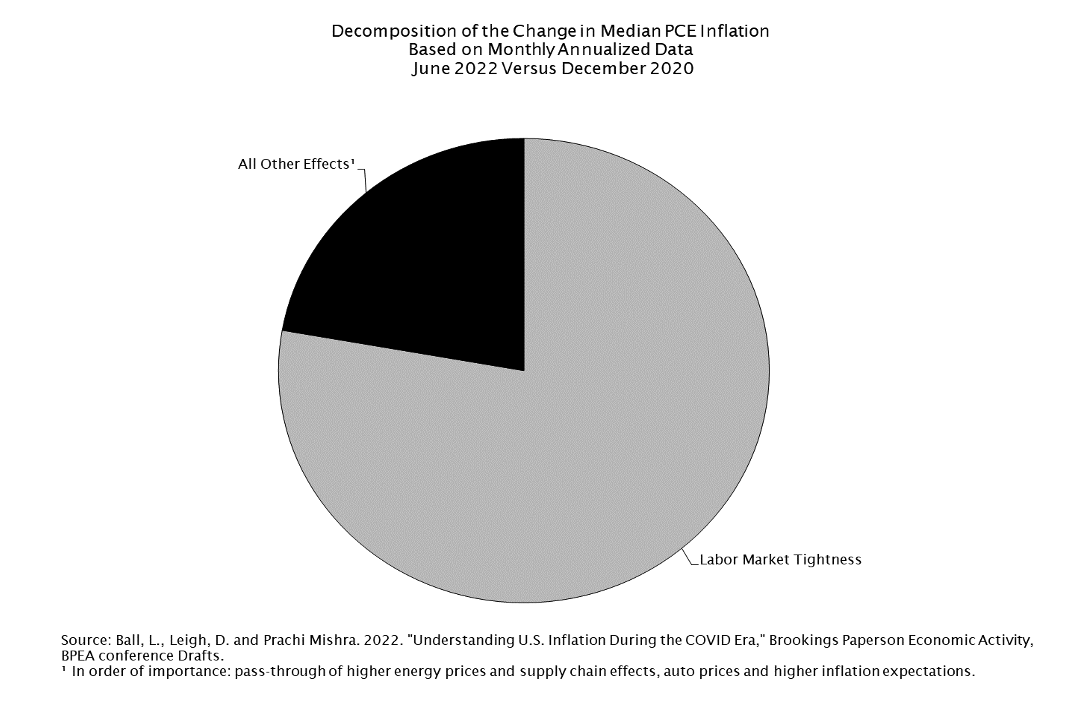 You’re probably wondering what The Good was? There was some, really. Putin’s war in Ukraine is not going well and for the right reasons: Russian incapacity, American military superiority and Ukrainian determination. Europe probably has enough energy supplies to get through winter. China didn’t invade Taiwan, and the Chinese economy is showing signs of life. Supply chain problems are easing. Much, if not all, of the speculative excess of last year (Crypto, NFTs (non-fungible tokens), SPACs (special purpose acquisition corps), and astronomical valuations (the Covid-lucky and select tech)) has been wrung out. The President said the pandemic is over. It feels over. (BTW, that was not an endorsement nor a political statement of any kind.) And pizza! Pizza is more expensive but still delicious. Frivolous? Perhaps, but it seems true that we’ve gotten back to our normal lives, and while things are more expensive, we’re ok. Oh yeah, and summer was good.

The opinions expressed are those of Brockenbrough*. The opinions referenced are as of the date of publication and are subject to change due to changes in the market of economic conditions and may not necessarily come to pass. Forward looking statements cannot be guaranteed. Brockenbrough is an investment advisor registered with the U.S. Securities and Exchange Commission. Registration does not imply a certain level of skill or training. More information about Brockenbrough investment advisory services can be found in its Form ADV Part 2, which is available upon request. *Lowe, Brockenbrough & Co. dba Brockenbrough

Let’s get to know each other.

Already part of the family?