The equity market’s relentless advance finally stalled out in the third quarter. The S&P 500, dominated by the largest cap stocks, rose less than 1%, while the Russell 2000 Small Cap Index actually fell 4%. Breaking things down, the large cap cohort was actually still rocking through the first two months of the quarter, but rolled over in September. This modest decline probably wouldn’t warrant much discussion in the average quarter, but we mention it because everyone is obsessing over how and when this amazing stock market run will end. We’re reminded of a saying: “that which can’t continue, must eventually stop.” Just out of curiosity, we Googled it. Turns out the man behind the thought was the twentieth century American economist Herbert Stein. So what, you ask? Well, aside from his distinguished career and famous progeny, it occurs to us that Professor Stein would find the current fiscal and monetary circumstances so alien that he might even question the very law attributed to him. But on one topic he would have no doubt: inflation. In a supply constrained world, he would shout, perhaps scream, that governments cannot run massive fiscal deficits and provide monetary accommodation on this scale without triggering significant inflation. And so it is - the markets are now dealing with it.

Despite repeated assurances from Fed officials that inflationary pressures are temporary, the data isn’t cooperating. Inflation is higher and more pervasive than at any point since the 1970s. After decades of inflationary policies in the developed countries, and especially after the extraordinary monetary experiments following the Great Recession failed to trigger inflation, a general consensus developed that persistently high inflation is no longer possible. The inflation Cassandras lost the room. We have to admit, we stopped listening too. We’re taking notice now, everyone is. Supply chain problems and shortages of materials and labor are pervasive. Boldly breaking with common writing convention, we’re not going to waste your time giving even one example. You’ve been there, you’ve choked on it. Of course inflation has spiked - scarce resources are allocated through higher prices. The question is, can the supply mess be unscrambled before a self-perpetuating inflation takes root? But that’s really two questions. Can it be unscrambled? Yes, absolutely it can. With caveats, it always has been. The second part really is difficult to answer. Entrenched inflation isn’t wholly inscrutable, but the evidence strongly suggests we don’t really understand it.

While it’s true that we can’t say what will be, we might be able to say what’s unlikely to be. Stagflation (inadequate growth, high unemployment and inflation) might be the worst outcome imagined. We’re hearing that bygone term used more frequently. We believe we’ll avoid it. Our view remains that demand will stay above average for the foreseeable future as the consumer has built substantial savings, is reliably spendthrift and the credit picture is good if not great. We simply need some of these supply chain dominos to fall into place, and economic growth will be at least adequate. That’s not to say we don’t have other serious issues: a curious labor shortage hammering service industries, overheated housing and energy markets and an increasingly belligerent and perhaps slumping China, and that’s far from an exhaustive list. In fact, we could, if gravely threatened, write reams on these topics and not get any closer to a convincing answer as to how this is all going to work out. We’re deep in the fog, and more words aren’t going to change that. For now, hopefully at the apex of supply chain woes and maximum uncertainty, we’ll simply reiterate that strong pent-up demand, a flush consumer, and a little luck should drag us through to a more normal environment. 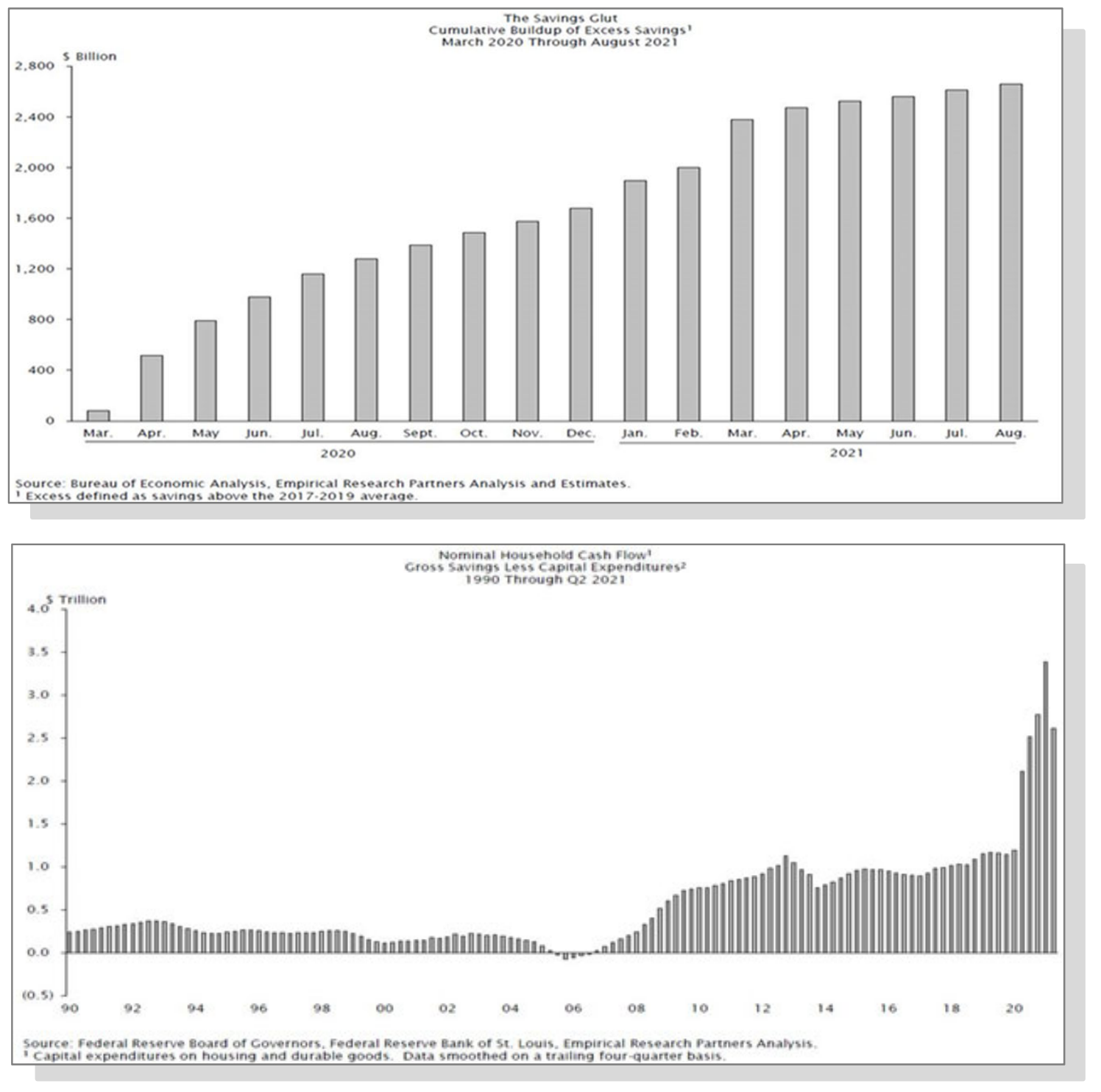 But we’ve got some quarters or at least months to get there, and in the meantime markets will have to eat a steady diet of conflicting, sometimes unsettling news. The bond market is of particular interest at this juncture. After a period of declines in the second quarter, yields began rising again in early August. Rising yields are generally interpreted as bullish for economic growth, but inflation can push them higher too. The Fed is also important in this calculus - any tapering of bond purchases will naturally raise yields. They haven’t begun, but it seems likely in the near future, as they’ve already telegraphed their intentions. Yields have a complicated Goldilocks relationship with the equity markets. We judge we’re in the ‘just right’ range, but that range is probably lower and narrower than in the past, perhaps even the recent past.

We say the future is unpredictable; it surely is. Doesn’t it seem strange that we accept a new narrative of how things will or might be with so little fuss? We never thought we’d spend an entire quarterly piece discussing inflation, or imagined supply and labor disruptions on this scale. And we’ve not even touched on politics or the pandemic. It all seems monumental, yet markets remain measurably calm, chill even. We (collective we) believe in the strength of the consumer, and that some of this stuff, hopefully, will mean-revert. But it’s more than that. In the most basic sense, it comes down to this: what’s long-term safe in times of historically low interest rates and unpredictable threats to the status quo? Mike Goldstein, one of our favorite strategists, recently said something that caught our attention. “The U.S. has cornered the market on hyper-profitable growth companies.” And so it has. Our markets are now dominated by the largest, most profitable, most unassailable global franchises ever created. And, amazingly, they are the fastest growing. Many of them aren’t even particularly cyclical or threatened by inflation. That’s not to say their stocks can’t go down; they occasionally will, but their enormous resources are potent medicine for ills/change that might be coming our way. And these qualities are increasingly found in the lower market cap tiers too. Consolidation, technological advances and better controls have doubtlessly increased corporate resilience across the board. The market is no longer dominated by deep cyclicals like energy and big industrials; they have lost sway. This is not the year 2000, and this is not your father’s S&P 500.

The opinions expressed are those of Brockenbrough*. The opinions referenced are as of the date of publication and are subject to change due to changes in the market of economic conditions and may not necessarily come to pass. Forward looking statements cannot be guaranteed. Brockenbrough is an investment advisor registered with the U.S. Securities and Exchange Commission. Registration does not imply a certain level of skill or training. More information about Brockenbrough investment advisory services can be found in its Form ADV Part 2, which is available upon request. *Lowe, Brockenbrough & Co. dba Brockenbrough

Let’s get to know each other.

Already part of the family?